FREE UK delivery & returns On all online orders over £20

Collect Ocean Reward Points Get discounts on the things you love

Turmeric and Ginger are both tremendously powerful herbs that have been used to cure and ward off numerous diseases for centuries. There is something magical about their combination. When used together they can create the perfect recipe for a healthy body. It is an old age recipe to improve health, stamina and balance. 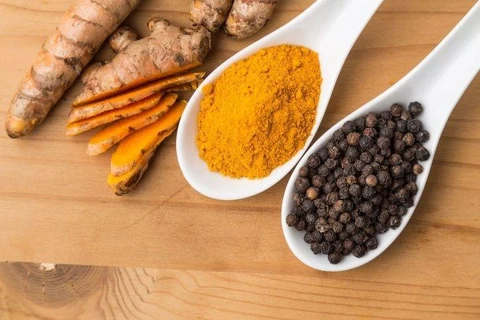 Do not exceed the recommended daily intake.

Turmeric is a powerful anti-inflammatory herb that has been used for centuries to treat a variety of ailments. This root which is a known cousin to Ginger is native to Southeast Asia and is sometimes called "Indian Saffron" because of its beautiful golden colour. The active medicinal ingredients in ginger are phytochemicals known as gingerols and shogoal. Ginger has long been used as an herbal remedy to relieve motion sickness, morning sickness, general nausea, and upset stomach and, more recently, post-surgical nausea and chemotherapy-induced nausea. Ginger has also been used to treat and prevent the growth of H pylori, the bacteria responsible for gastric infections and ulcers.

The key compounds in Turmeric are called curcuminoids. Curcumin itself is the most active ingredient and appears to be the most important. Curcumin has several advantages to health and wellbeing. It is a strong antioxidant, and has anti-bacterial, anti-inflammatory and anti-fungal properties.

However the greatest downfall of curcumin is that it is not well absorbed in the body. This is where Piperine comes in (AKA Black Pepper).

Black Pepper contains a bio-active compound called Piperine (the active compound in chilli powder and cayenne pepper).  Piperine has been shown to relive symptoms of nausea, headaches and poor digestion. It also has anti-inflammatory properties.

Unfortunately, curcumin in Turmeric is poorly absorbed by the blood stream therefore you could be missing out on its advantages to health. By adding Black Pepper, research supports, that combining the piperine in black pepper with the curcumin in Turmeric enhances curcumin absorption by up to 2000%. Thus meaning you will not miss out on the benefits unlike many other supplements.

The brand is run by a small family of experts who have been successfully working within the health and wellbeing industry for many years and in a short space of time have already gained a spotlight in the supplement world.

DISCLAIMER: This product is not intended to diagnose, treat, cure, or prevent any disease. All information provided on this site is for educational purposes and should not be construed as medical advice.